The Science Behind BURST Training

9 Minutes a week for 4 Weeks, 2 in. & 8 lbs Lost with BURST
Pilot Study - Nashville, TN - 2010
This study examined the 3-Minute B.U.R.S.TCore program and its overall effectiveness. Participants ranged in ages from 24-57. Subjects performed the B.U.R.S.TCore Program and its unique exercises 3 times a week for a total of 9 minutes of actual work per week for each participant. At the end of 4 weeks, subjects lost an average of 2 inches and 8 lbs. of fat from their bodies. This study proves that fat burning and inch loss can take place after very short, burst-type workouts, even if only done 3 days a week.

Cardiovascular Improvement with Burst Training
Journal of Applied Physiology - Feb 10th, 2005.
This study tested the effectiveness of Burst Training on the cardiovascular system. Subjects of average beginning fitness levels performed 16 minutes of high-intensity sprinting over a two-week period. When retested after two weeks, endurance had doubled.

Women Lose More Body Fat with Burst Training Than Aerobic Zone Training
Journal Medicine and Science in Sports and Exercise - 2001
A 2001 study in the American College of Sports Medicine's flagship journal, Medicine and Science in Sports and Exercise compared two groups of women. One group exercised using standard zone aerobic training while the other group used anaerobic interval exercise. The anaerobic interval group exercised for two minutes at a highly intense 97% maximum heart rate. They then rested by doing three minutes of low-intensity activity. The aerobic group performed moderately intense activity at close to 70% of maximum heart rate. The researchers made sure each group burned exactly 300 calories. Despite exercising longer and burning the same number of calories, the aerobic group lost less body fat at the end of the study than the interval group. In addition, fitness in the interval group was substantially greater than in the aerobic group. This study demonstrated the effect of EPOC and shows that something other than caloric output is driving metabolism.

Burst Training Burns Fat for 24 Hours
Journal Medicine and Science in Sports and Exercise - 1996
This study showed that an anaerobically trained interval group (Burst Training) burned significantly more fat than their aerobically trained counterparts. Not only did the interval group burn more fat during exercise, but they exhibited increased fat burning effects that persisted for 24 hours after the exercise had stopped. These results clearly show that Burst Training burns more overall fat and calories during exercise, and demonstrate that EPOC (Excess Post-Exercise Oxygen Consumption) leads to a continued fat burn after exercise. The interval group accomplished this with an exercise session that was 15 minutes shorter than the aerobic group.

Sprint Training Increases Endurance
Journal of Applied Physiology; Vol. 102, No. 4, April 2007: 1439-1447
This study compared two groups to see whether sprint training would increase endurance. Researchers asked eight college-age men and women, Group A, to sprint for 30 seconds, and then either stop or pedal gently for four minutes. After only two weeks of this interval training, 75 percent of Group A doubled their endurance. Group B did regular cardio, with no interval training, and showed no improvement in endurance. The marked improvement in the interval training group was even more startling because the volunteers were already fairly fit.

Burst Training Increase Fat Burning
Journal of Applied Physiology; 2007
This study showed that burst training enhances the body's ability to burn fat. Eight women in their early 20s were told to cycle for 10 sets of four minutes of hard riding, followed by two minutes of rest. After two weeks, the amount of fat burned in an hour of continuous moderate cycling increased by 36 percent, and their cardiovascular fitness improved by 13 percent.

Interval Training Increases Fitness
New York Times & The Ledger, May 3, 2007
New findings suggest that it pays to alternate short bursts of high-intensity exercise with gentle recovery during workout regimens at least once a week. Although this alternating technique, called interval training, has existed for decades, a new study has confirmed that it can dramatically improve cardiovascular fitness and the body's fat-burning capabilities.

Short Bouts Considered Appropriate Activity Goal
Centers for Disease Control & American College of Sports Medicine 1995
A group of experts was brought together in 1995 by the Centers for Disease Control and Prevention (CDC) and the American College of Sports Medicine (ACSM) to review the pertinent scientific research and to develop a clear, concise "public health message" regarding physical activity and the alarming trend in declining fitness levels of the American population. The panel concluded that every US adult should accumulate a daily caloric expenditure due to exercise of between 120 and 210 Calories, and that the activity does not need to be continuous. In fact, it was stated, "...accumulation of physical activity in intermittent, short bouts is considered an appropriate approach to achieving the activity goal." This recommendation was based on the mounting evidence indicating that the health benefits of physical activity are linked to the total amount of physical activity performed, suggesting that the amount of activity is more important than the specific manner in which the activity is performed (i.e., mode, intensity, or duration of the activity bouts)

"Research done on both elite and novice athletes shows that high-intensity, short-duration exercise, or burst training, actually increases your muscle building hormones like natural human growth hormone and testosterone, as well as beta endorphins (it’s ok ladies—this is a good thing!). This hormonal shift turns your body into a muscle-building, fat-burning machine. Jogging, as well as other traditional cardiovascular exercises, produces cortisol and therefore has the exact opposite effect. It is so easy to be misled when it comes to fitness. Six-pack abs and sculpted arms don’t necessarily indicate someone’s true level of health. With burst training, you can actually get into shape without living at a gym."

Dr. Ben Sweeney, D.C. attended Lee University in Cleveland, TN to do his undergraduate studies and played 4 years of collegiate basketball. His 4 years of chiropractic education included time spent at Life College of Chiropractic in Atlanta, GA and Palmer College of Chiropractic in San Jose, CA. With extensive training in biochemistry, anatomy and human physiology, X-ray diagnosis, chiropractic adjusting techniques and patient care, Dr. Sweeney’s passion is to help patients that have tried "everything" and given up hope of regaining vitality and increased quality of life.

"Short duration, high intensity exercise, or burst training is the most effective way to get the results that people want. Burst training releases less of the stress hormone, cortisol, than any other type of exercise. Too much cortisol is detrimental because it stresses the body, causes premature aging, prevents fat loss, and breaks down muscle. Therefore, minimal cortisol release during workouts is ideal. Science shows that this is best accomplished through burst training. I personally burst train, all my patients burst train, and every professional athlete out there is burst training because of its effectiveness."

Dr. Matthew McAlees, D.C. earned his Doctor of Chiropractic degree at Palmer College in Port Orange, FL. He has helped patients rebuild their health at one of the largest Maximized Living Health Centers in the world. Most recently he was elected to the U.S.A. wrestling teams’ Wellness Advisory Council. Dr. McAlees has traveled all over North America, Europe, and Africa speaking on the principles of gaining victory over disease. On a recent trip to Denmark he operated as a team physician in the Denmark World Championships and the London Olympic games.

"For me, the thing I love about BURSTClub is that it takes you outside the realm of a conventional workout. Nathan and Jenni ensure that your entire body will be working, rather than just a couple muscle groups, like one would get at the gym. I’m a huge fan of functional movement and believe that the body is designed to move! BURSTClub hits my entire body and keeps me moving…functionally. That’s something we all need for life-long health and wellness."

John Elder is the Clinic Owner/Director of The Egoscue Method Nashville. The Egoscue Method is the world leader in non-medical pain relief. As an athlete and former Division I baseball player, John knows firsthand the need to become self-reliant and regain a life of freedom from pain. He is a sought after speaker, is certified as a Posture Alignment Specialist (Level II) and Advanced Exercise Therapist (AET) by Egoscue, and has been a featured columnist for Health and Wellness Magazine and the Nashville Striders’ FunRunner magazine. John has presented multiple seminars at the American Fitness Professionals & Associates (AFPA) National Conference and is also a TPI Certified Golf Fitness Instructor, working with professional golfers on the PGA, LPGA, Champions Tour, and Nationwide Tour as well as PGA coaches and swing instructors from all across the country.

"I can confidently say that burst training is unparalleled in comparison to other methods of working out. I was a bit skeptical at first, due to more than 20 years of being conditioned to run or train as long as possible, with as heavy weight as possible. But in the 3+ years that I have been burst training, I have found it to be far more effective, less time-consuming, and easier on my body than traditional exercise. I highly recommend burst training to anyone wanting to recharge their metabolism, lose weight and/or inches, gain lean muscle mass, and experience better quality of life!"

Rebekah Joy Blesch - A Licensed Massage Therapist for 4 years, and a personal trainer for 6 years, Rebekah's experience in the world of health and fitness is rooted in 20 years as a competitive athlete, including playing Division I basketball at both the University of Alabama and Liberty University. Through the avenue of basketball, Rebekah has been privileged to travel to multiple countries, including Israel, Macedonia, Chile, Costa Rica, and the Dominican Republic. Rebekah’s years as a massage therapist, personal trainer, and competitive athlete have enabled her to see first-hand the world-wide need for sound, effective counsel in regards to overall health and fitness.

"Over the years, I’ve noticed a trend in the effectiveness of particular fitness routines. I’ve trained many endurance athletes who had great stamina for longer distance activities, but struggled with decreased energy, losing excess body fat and/or maintaining muscle mass. Whenever I would put my clients through a burst routine, they would see greater fat loss, increased amounts of energy and maintenance of (or even building) lean muscle mass. Our bodies are at max stress levels more than ever before. It seems that longer periods of moderate exercise only further break down the body, rarely resulting in needed weight loss or increased energy. With the proper technique and safety precautions, burst training will greatly benefit those who engage in this time-efficient form of exercise."

Joanna Korber, PT, CNC is a certified Personal Trainer and Group Fitness Instructor with nearly 2 decades of experience. She specializes in various forms of training from Kickboxing and Boot Camp to Pilates Reformer and Ballet Barre. She is also a certified Nutrition and Wellness Consultant and holds a Master’s Degree in Social Work. She invested years as a Nutrition Manager for young women seeking freedom from eating disorders and emotional difficulties. 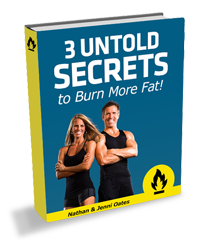 GET A FREE E-BOOK!

Join our newsletter and get a FREE eBook (Valued at $29.95) that will show learn how to burn 9x more fat in a fraction of the time!

Plus get 3 exclusive secrets to help you:

We Are So Confident You'll Love the Results,
We're Offering You A Money Back Guarantee!